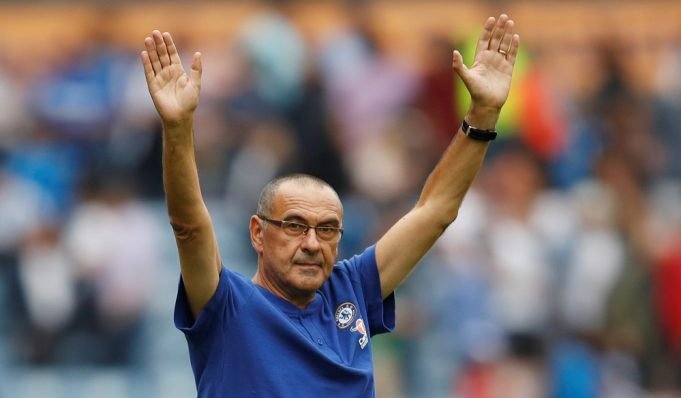 The 59 year old got off the perfect start

The Italian manager got off to a perfect start as the London outfit defeated Huddersfield which was secured courtesy of goals from N’Golo Kante, debutant Jorginho and Pedro.

Chelsea will face Arsenal at Stamford Bridge in next Saturday and Sarri has revealed that the Club will have to improve in two areas ahead of the London derby.

He said as quoted by Metro: ‘We have to improve to defend in the other half, to press against three defenders. We have to move the ball faster. We did it better in the second, there was more space and time.

‘It was a really hard for us. We were not ready to their situation, for us it was a problem. This team has not the experience against, maybe for the Naples it was not a problem. For Chelsea some players have only just arrived.

‘I am very happy because in the first part of the season for us it is not easy to gain points. The first half was hard. If you look at the result you can think of an easy game.

‘We were in trouble for 15 minutes against a physical team, we are not a physical team. The best capacity was to suffer, but then I think the second half maybe they were tired.’