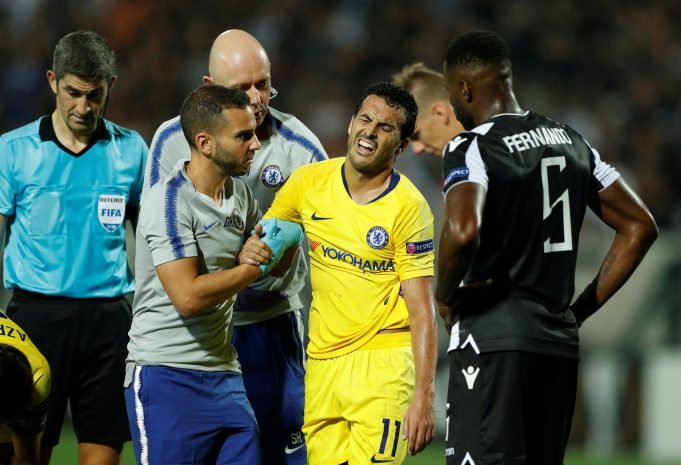 Chelsea boss Maurizio Sarri hopes that Pedro will return to action soon from his shoulder injury. The Spanish forward collided with PAOK goalkeeper Alexandros Paschalakis during the final moments of the game and was taken off the field by Chelsea’s medical staff.

An initial assessment evaluated that Pedro did not suffer severe damage on his shoulder.

Sarri said that he doesn’t know the extent of Pedro’s injury but hopes to see the 31-year old recover soon.

The Italian said, “I don’t know. The problem is shoulder, but I don’t know exactly the situation. I have spoken with the doctor, but only for a few seconds. The doctor told me that probably it’s not a very serious injury.

Chelsea won the match 1-0 thanks to an early goal from Willian who also wore the captain’s armband for the match.

Chelsea resume their Premier League campaign on Sunday against West Ham at London. Their next Europa League game is against Hungarian club Mol Vidi. Mol Vidi lost their match against BATE Borisov 2-0.