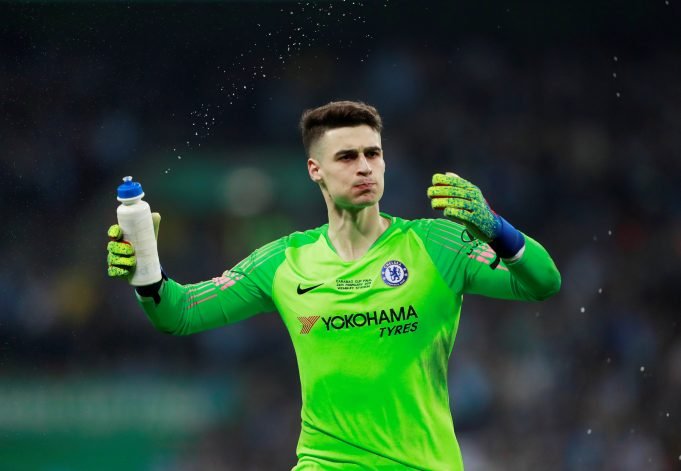 During the dying moments of extra-time during tonight’s Carabao Cup encounter between Chelsea and Manchester City, Chelsea boss Maurizio Sarri was about to make a final substitution.

With penalties nearing, Sarri was keen to bring on the more experienced Willy Caballero and replace Kepa. However, Kepa was determined to stay on the field.

Caballero was ready to come on but Kepa was adamant. Despite being told to get off the pitch by Sarri, Gianfranco Zola and David Luiz, the Spaniard did not do so.

Even though this was a strong show of character by the Spaniard, Sarri was totally miffed with the World’s most expensive goalkeeper. In the end, Sarri decided to let Kepa stay. However, he did not shy away from displaying his frustration.

The match eventually went to penalties and Kepa did save a penalty from Leroy Sane. However, Jorginho and David Luiz were both unable to convert their respective penalties and Manchester City won the penalty shootout 4-3.

Thus, Manchester City win their 6th League Cup title while Chelsea remain trophyless this season as of now. The Europa League is the only tournament Chelsea have a shot of winning. The Blues next play a Premier League fixture against Tottenham Hotspur on Wednesday.

Video: Maurizio Sarri furious at Kepa refusing to be substituted

Maurizio Sarri tries to substitute Kepa Arrizabalaga for Willy Caballero, but Kepa refuses to come off and Sarri is absolutely FURIOUS! ? pic.twitter.com/Q81v6ry3Kk