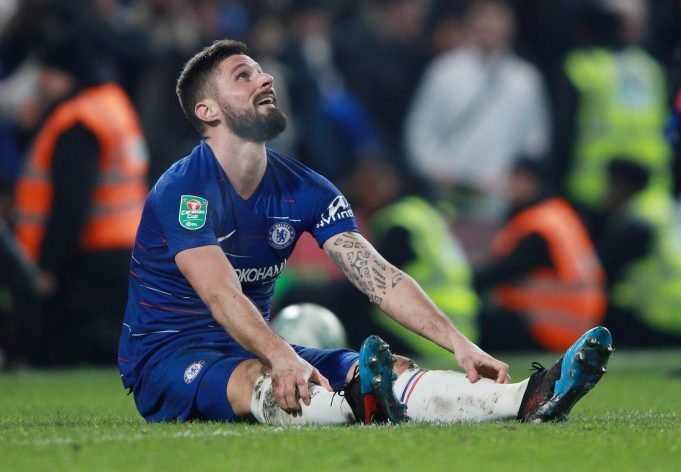 Lyon president Jean-Michel Aulas has insisted the French side would ponder the options of bringing Olivier Giroud to the club.

Lyon are a long term admirer of the French side and could launch an attempt to bring the player back to Ligue 1. The former Arsenal striker has never looked to be the first choice striker at Chelsea since his arrival and had played the second fiddle to Alvaro Morata who recently moved to Atletico Madrid on a loan deal.

Maurizio Sarri has used Eden Hazard in the false nine role and the arrival of Gonzalo Higuain is likely to curtail his game time more. The French international is regarded as one of the best target men but hasn’t been able to register his name on the good books of the Italian manager.

With his contract set to expire this summer there won’t be a dearth of suitors for the forward. Lyon president said, “I dreamed of having him come last summer and I even called Arsene Wenger for more information.

“Gerard Houllier knows him well, too.

“We had discussed it when I was in Moscow with the France national team during the World Cup. Things could not be done from his side, though.

“Right now, we have a lot of options in attack. If someone up front left, then a deal could interest us, especially because he has a different profile compared to our players.

“This summer, of course Giroud will interest me. It seems a little too late to do something during this winter window. We are not going to overload on forwards, especially since we have a really good team.

“We’ll have to see which coach will be there for that moment at the end of the season, but I like the boy. He’s a good person.”