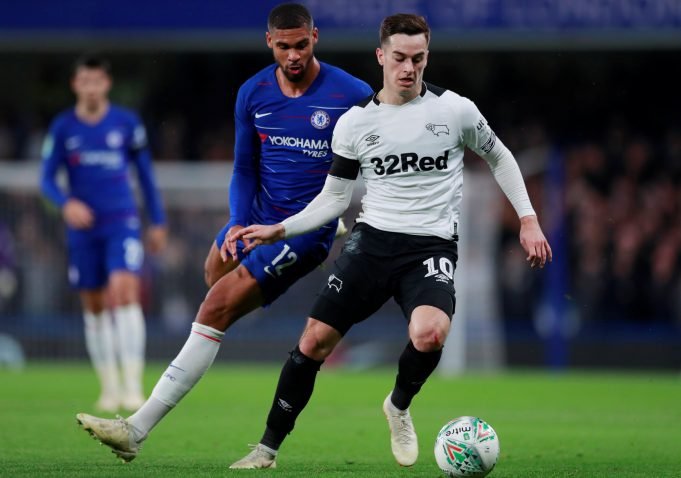 Chelsea midfielder Ruben Loftus-Cheel has said that despite having less game-time, he won’t leave Chelsea.

Ever since joining Chelsea’s senior team in 2014, Loftus-Cheek has struggled to be a regular at the club. Last season, he had to seek a loan move to Crystal Palace to have some game-time.

This season, the 22-year old has not made a single Premier League start for Chelsea. However, he has made starts in other competitions and has been impressive in those games. Loftus-Cheek scored his first career hat-trick against BATE Borisov 8 days back and last weekend, scored his first league goal of the season against Burnley. Many including Maurizio Sarri have praised Loftus-Cheek’s performances this season.

Due to the presence of several quality midfielders, it’s very hard for Loftus-Cheek to find a place in Chelsea’s starting XI. Hence, many have advised him to leave Stamford Bridge. However, Loftus-Cheek has said that he will continue to play for Chelsea.

He said, “I hear it a lot, and I can see why people are saying that, because I’m 22 now and haven’t got too many Premier League starts to my name. I haven’t played too many minutes, whether it be in the Premier League and the Championship, and at 22 it’s not seen as enough by some people. I do hear it.

I love the club and I love Chelsea, I want to play for Chelsea. Last season [moving to Palace on loan] was a decision I made because I hadn’t played any football really, at the age of 21, and last season was great for me at Palace. Twenty-four [appearances] I think I had in the Premier League, and then to go on and make my England debut. I made a lot of steps last year.

Twenty-four [appearances] I think I had in the Premier League, and then to go on and make my England debut. I made a lot of steps last year.”

Like all other League matches, Loftus-Cheek will most likely be on the bench for tomorrow’s match against Crystal Palace. However, Maurizio Sarri will certainly consider bringing him on as a substitute.