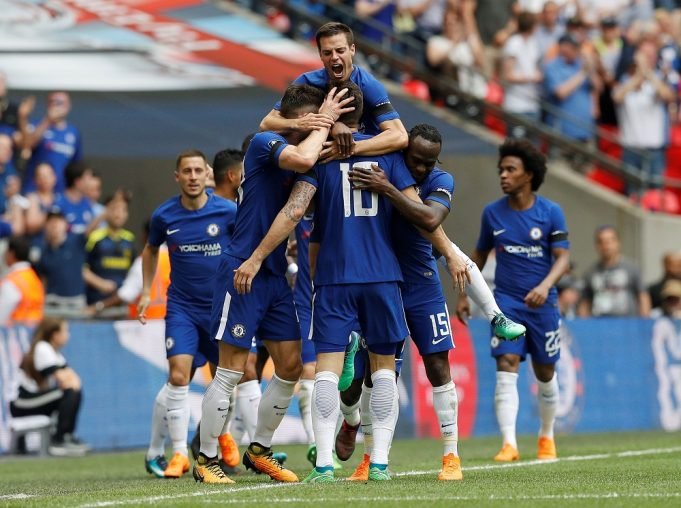 The Blues have reached the FA Cup final

Chelsea were facing Southampton in the FA Cup semi final and it was a season defining game for them, as it is the only possible silverware they can win this season.

Though the first half of the game was scoreless but the the Blues stepped up their game in the second half. Olivier Giroud scored within a minute of the second half and Alvaro Morata made an instant impact by scoring a goal withing few minutes of coming on as a substitute to ensure they reach the finals.

Former Chelsea midfielder Frank Lampard was impressed with the club’s performances but singled out a particular player.

Lampard was pleased with Eden hazard’s displays and believes he is better than any player on the pitch when he is on top form.

The Belgian International was instrumental in Chelsea’s win with creating chances in the first half and assisting Giroud for the goal. Lampard says it was clear Hazard was on form from the early stages.

“I think sometimes with Eden Hazard you can tell in the first five minutes by his body language, by his change of direction and how quick he is, what mood he is in and what kind of game he’s going to have,” Lampard said at half time, as quoted by Express.co.uk

“We saw that instantly and when he’s like this, he plays his own game.

“He’s different to every other player on the pitch.

“He’s quicker, he sees things other players don’t see and he is the catalyst.

“To be fair Chelsea haven’t created that much, it’s just waiting for Eden Hazard to get on the ball to see what he can do.”

Chelsea will face Manchester United in the FA Cup Final on 19th May.