Frank Lampard has said that his Chelsea team are good enough and he does not new signings at the moment to get going.

I watched a lot of Chelsea last year under Maurizio Sarri,” he said ahead of Chelsea’s pre-season clash with Kawasaki Frontale in Yokohama.

“In terms of the way that the season finished, to win the Europa League and secure Champions League football, it was a successful season. But for me, the story is not to look backwards.

“I know the club very well, I know the players very well. I have my own way that I want to work with the players, and I have to say in one week that we have been training I have been very happy with the attitude and the quality of the players. My job now is to work hard in pre-season with them.

“I like my teams to play with a lot of energy and speed, with and without the ball, so I want to win it back as quickly as we can. When we have the ball, I want to move the ball quickly and create chances and win games and feel like we are playing football that we enjoy. So, that is my job now.

“I think I have inherited very good players. We can’t bring any players in this year, we know that, but I don’t need new players. I am very happy with the squad and determined for us to be successful.” 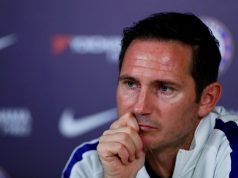