Chelsea FC Latest News .com
Home Chelsea FC News Hazard: We are all with the manager 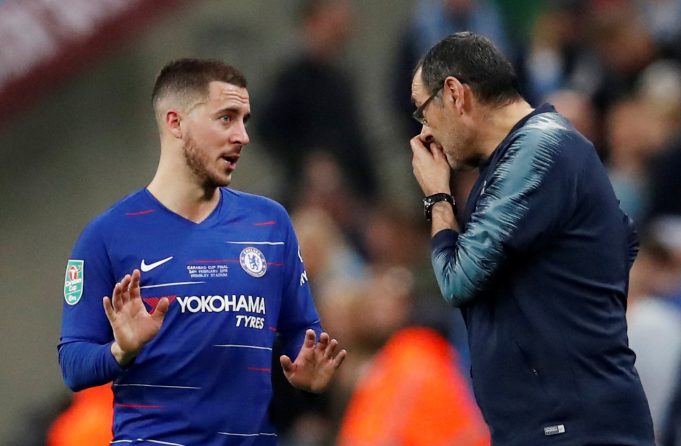 Chelsea star Eden Hazard has claimed that manager Maurizio Sarri has the backing of the entire squad. There has been a lot of talk about Sarri’s future at Chelsea after recent defeats to Bournemouth, Manchester City and Manchester United put his job in jeopardy.

Things got even worse during the Carabao Cup final when goalkeeper Kepa ignored Sarri’s direct orders which infuriated the Italian. Subsequently, Kepa received a fine.

Before Chelsea’s match against Spurs at Stamford Bridge, Hazard said that the squad is behind Sarri. The Belgium international told Chelsea’s official website, “We are all together. We are all with the manager. I know this month was a bit hard but we need to be together, stay together, if we want to do something at the end of the season.

At the moment we have a bit of pressure because the fans want us to be in the top four, but we’re Chelsea and we can deal with the pressure. We will win games and that’s it. We are there. This is a hard game but we can close the gap a bit on Tottenham. We have the potential to be in the top four but we don’t have to think about that. We just have to think game after game and try to win one more game.

We are playing for him [Sarri], the club, the fans and us. It’s not just about the manager. He puts the players on the pitch and then it’s down to the players to take responsibility. On Sunday we played a fantastic game, we need to look at that and try to repeat it. Then the manager will be happy.”