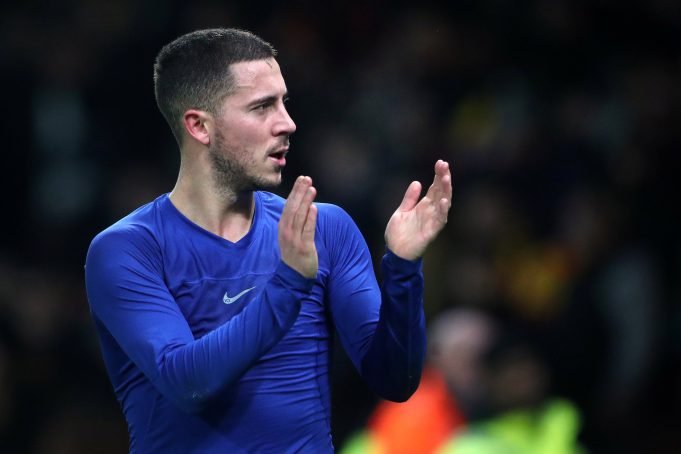 Chelsea talisman Eden Hazard said that he wants to become a legend at the club. The Belgian winger scored both of Chelsea’s goals in yesterday’s 2-1 win over Watford at Vicarage Road.

Hazard’s opening goal before the interval was his 100th for Chelsea.

The Belgium’s goal tally this season is now 12 from 22 matches. He is currently 4th in the Premier League goalscoring charts with only Harry Kane, Mohamed Salah and Pierre-Emerick Aubameyang with more goals than him.

Speaking after the match, Hazard spoke about reaching 100 goals with Chelsea. The 27-year old said, “It means a lot, especially because we also won. Scoring 101 goals with this amazing club is something I will never forget, but now I think the fans, the staff, myself, the players, we want more.”

Hazard also said that he wants to be held in the same regard as John Terry, Frank Lampard and Didier Drogba. He said, “I want to score more for this club and then try to be a legend like [Frank] Lampard, [John]Terry, [Didier] Drogba, I try to do my best. But when we are winning we can enjoy a lot.”

The Belgian added, “We showed great character against Manchester City after losing to Wolves and today we did the same. We lost three days ago against Leicester and we needed to respond on the pitch and we did well.

When we can fight together we are a top team so we need to do it more often. I missed a couple of chances, especially in the first half, but when you miss you just need to keep your focus and try to score more goals.”

Chelsea are now 4th in the Premier League table with 40 points, four behind Manchester City and 11 behind leaders Liverpool. The Blues next play another away game, this time against Crystal Palace at Selhurst Park on Sunday.