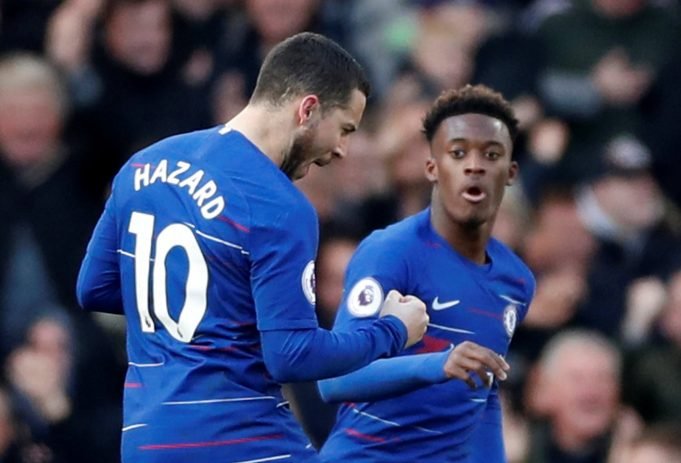 Chelsea star Eden Hazard feels that Callum Hudson-Odoi is a great player but he should maintain a sense of humility if he is to improve.

Despite being just 18, Hudson-Odoi has managed to make 20 appearances for Chelsea this season, a number which people think is less. The winger has scored 5 goals and has provided as many assists. Hudson-Odoi is touted by many to be one of the best players in Europe in the future and has done pretty well for Chelsea so far.

Hudson-Odoi made his first Premier League start in Chelsea’s match against Brighton and even scored a goal.

Speaking about Hudson-Odoi, Hazard jokingly said that he was better than the winger when he was 18 before giving a serious opinion on the teenager. Hazard said, “[I was] better I think! I don’t need to talk. If he wants to ask me something, I will tell him, no problem, but he is a great player already. I am not surprised.

Since day one he trained with us, he had great skills. If he wants advice, I can teach him, but you know he has everything already. I think the guy was waiting to start a game in the Premier League, but he is ready. You can see the way he is taking the ball. He is playing with a lot of confidence. He is still young and can improve, of course, but he is already very good. I think he was happy to play today. You know when you are young you just play, and sometimes you try and miss, but the good thing is to give freshness in the team.

I think Callum can play three games. He can run, he has the legs for 90 minutes. At 28 we are a bit tired at the end, but I think he is still young. As I said, he can still improve but he is in a good team to learn, and we are happy to help him.

I told him if he stays humble at first, for me it is the best thing, to stay humble. Work in training, score goals, and then be happy on the pitch. He can go very far. I was not listening to everything [people said about me]. Then I think my family also helped me to stay humble. In football that can happen very quickly, you can be at the top in two months, and then in two months, everyone can forget about you. But I think if you keep your feet on the floor and train…

I think for him it is easy because the players he has around him are quite humble, so if we were all thinking we are the best, for him, it could be hard to stay humble. But he is intelligent and has a family that cares for him.”

After impressing against Brighton, Hudson-Odoi will hope to put in another strong performance in Chelsea’s next match against West Ham on Monday.