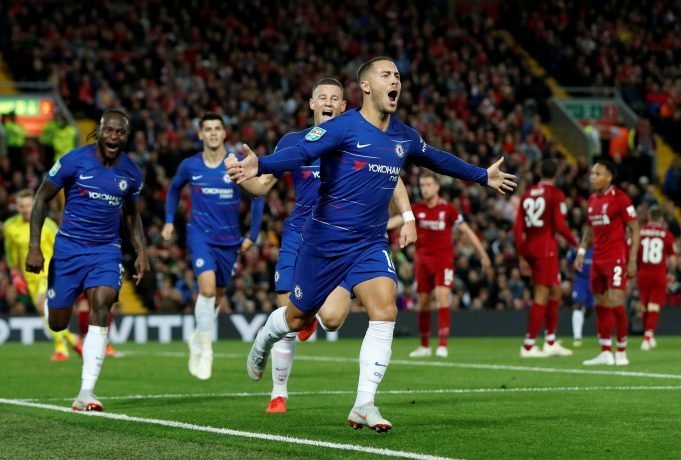 Both Hazard and Kante were on the bench for the Carabao Cup fixture yesterday. Hazard came on in the 56th minute for Willian while Kante came on for Mateo Kovacic in the 64th minute.

Just two minutes after Hazard came on, Daniel Sturridge opened the scoring for Liverpool through a terrific overhead kick. However, Chelsea equalised through Emerson Palmieri who made his first start of the season. Then in the 85th minute, Hazard scored a stunning winner after dribbling through the Liverpool defence.

The win ended Liverpool’s winning streak. After the match, Hazard spoke about his conversation with N’Golo Kante on the bench. He said, “I spoke with N’Golo on the bench and he told me he didn’t want to take a penalty, so the only solution was to score! I just tried to do what I can do. This result will give us more confidence because we drew with West Ham four days ago.”

Chelsea play Liverpool again on Saturday, this time at Stamford Bridge. Hazard said, “The game on Saturday [with Liverpool] is more important. We have got to try and beat Liverpool on Saturday.”

Provided Chelsea beat Liverpool on Saturday, then they have a good chance of returning to the top of the Premier League table.