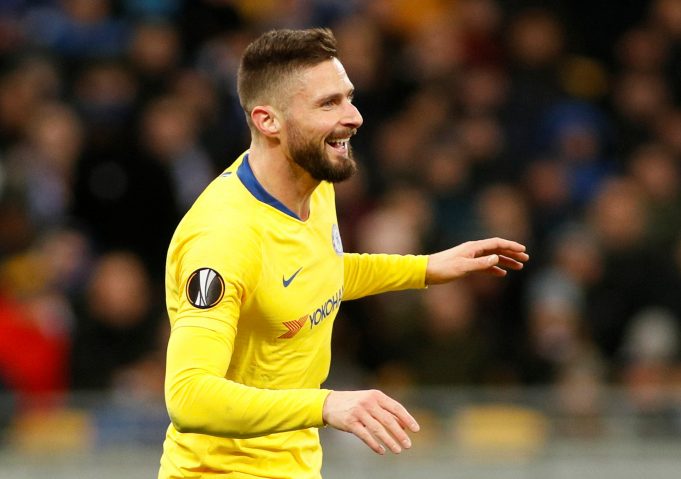 Chelsea striker Olivier Giroud has revealed that he will not accept a peripheral role at Chelsea. The player notched up a hat-trick to lead the Blues to a comfortable win in the Europa League round of 16 contest against Dynamo Kyiv. The Frenchman, however, has not been handed a permanent starting spot in the Premier League matches by manager Maurizio Sarri and has been used more as a fringe player, which has reportedly not gone down well with the former Arsenal player as he is looking for a starting spot.

The player’s latest comments are an indication of the fact that his future at the west London club might be in doubt. The 32-year-old striker’s contract at his club will be up at the end of this season. When asked whether he is accepting a peripheral role to Gonzalo Higuain at Chelsea, Giroud said, “No. No chance. I’m a competitor.”

He added, “I have been through a lot of tough moments in my career. I just want to enjoy playing football after winning the World Cup last summer. I want to play every single game and to be happy on the pitch. But I am not picking the team, the manager makes some choices. I play in the Europa League and I am happy to help the team to go through the stages, step by step. The target is clearly to win it. The championship (Premier League) is another thing, you know?”

Throwing his future in doubt at Chelsea, the player said, “Now we don’t know about the future – who can say? We’ll see.”