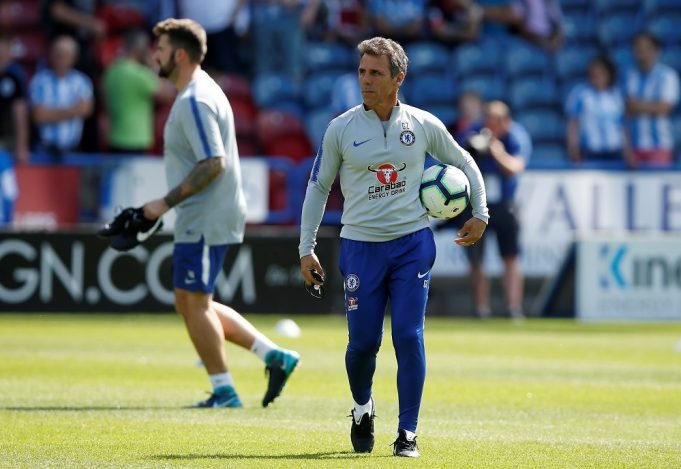 The Player struggled for form throughout the last season

The 25 year old future’s has been uncertain throughout summer and was linked with a return to Serie A, with his former club Juventus and AC Milan interested in him.

However, the player took active taken part in pre-seaon training and and started in the opener against Huddersfield last weekend. The London outfit won the match 3-0 but he again struggled to make an impact.

Chelsea legend Dennis Wise hopes that his former teammate and Sarri’s new assistant Zola could be the one to help Morata to rediscover his form this season.

“I think if we can get Morata scoring goals, I think that is very important,” the former Chelsea captain told Goal. “Obviously last season he got a few injuries and not enough goals but I think he has a lot of quality.

“Once he builds his confidence and scores, you would have a real striker there. I think it has taken him a little bit of time to get used to the Premier League. Last season wasn’t his most outstanding season.

“So I expect a bit more from him. I think he can learn from Gianfranco. I think it will be great and Franco will take him under his wing to help us. If he can get enough goals, then we would start to compete.

“It is important that others share the load as well. [Olivier] Giroud is still there, they are people who can add to that tally and get more goals. I think it is important that they score as well, I think that is something that is a little bit lacking.”

“I don’t think Maurizio will, Franco will or the players will [turn their back on Morata],” the 51-year-old added. “I think they will get behind him, so he is someone who you probably need to help a bit. You can see that he really wants to do well.

“Sometimes it doesn’t go as well as you want in your first season, so therefore you are looking for a little bit of help from personnel. There was obviously a lot of change around the club last season. There was a period of six months where there was a lot of upheaval, I would say, now it is all changed.

“I think everyone is looking forward in the season in a positive manner. What we want from Morata is an early goal and to hit the ground running and to make an impact. If he can do that, it can help the team.