Chelsea is currently 4th in the table, only two points clear of 5th places Manchester United – and it’s going to be a pressure on both clubs to maintain the top-4 spots and fight for the CL qualification.

“I think every game is going to be pressure now,” Lampard told reporters. “West Ham was pressure because we knew we could go third. It’s a different kind of pressure but it’s still the same in how you focus on the game and job at hand.

“You cannot get too caught up in what everyone does at the moment. We did that tonight. There was no nonsense. The mentality was right. We started brightly and we carried on and got the small details of the game right at both ends of the pitch, which I was happy with.”

Lampard understands that instead of forcing the squad to finish in the top 4, he should allows the Blues to “embrace” this fight.

“It is not a comparison to get too caught up in,” Lampard said of Manchester United. “They are a very good team; we know that. The individuals that they have, the squad, the coaches that they have. We can only respect that.

“I watched their game early and with the individual quality when you look across their frontline you see two players on 20 goals and Mason Greenwood doing what he is doing scoring regularly.

“[Bruno] Fernandes and [Paul] Pogba in midfield, the signing of Harry Maguire. They are a really strong outfit. We know that and the fact we are two points ahead we have to be happy about.

“We know it is going to be contested right until the end of the season with the form that they are in. With respect to Manchester United and the teams around us, we have to focus on ourselves and try to keep picking up results. That will be the main importance to us.”

See More: Chelsea FC Top Scorers of all time (all competitions by season) 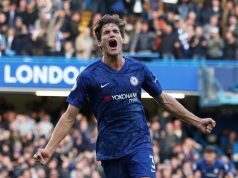 Marcos Alonso considers transfer request to get out of Chelsea