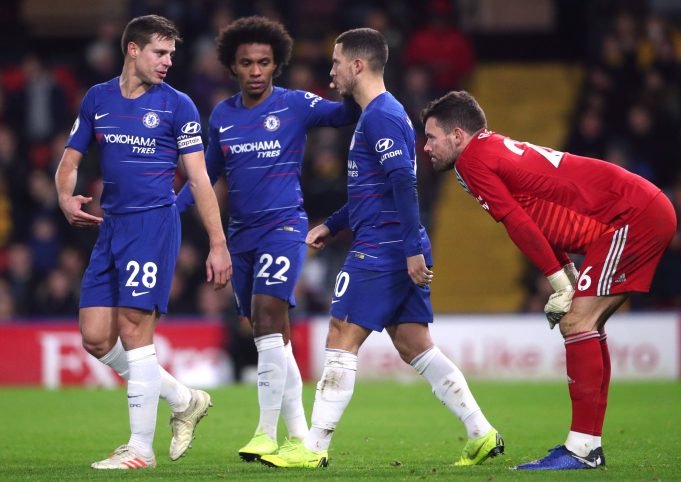 Former Chelsea star Jimmy Floyd Hasselbaink believes that lack of leadership will cost Chelsea today’s Carabao Cup final. Chelsea will be entering Wembley with the hopes of lifting their first silverware of the season. However, their opponents are Manchester City who thrashed them 6-0 some days back.

Chelsea boss Maurizio Sarri needs his side to win this game as it might save his job. Both sides will be fighting to win their 6th Carabao Cup title and Hasselbaink believes that Manchester City will be triumphant this evening because Chelsea lack leaders.

The former Netherlands international said, “It’s a big week but every match is important for Chelsea now and how they react against City and Tottenham will shape their season. They face a mountain to climb to beat City today but they did it in the League in December and must go back to that plan and have some belief.

Chelsea were too open and passive in the 6-0 defeat at City so at Wembley they have to be aggressive, hungry and press hard. After losing heavily to City and then 2-0 to Manchester United in the FA Cup it’s no time for a blame game, finger-pointing or for them to be be feeling sorry for themselves.

They have to roll their sleeves up, stick together and stand up to the challenge and the pressure.My worry, though, is the lack of leaders in the current squad. Good players, yes, but I don’t see any leadership on the pitch.

In the past Chelsea have been blessed with big characters on and off the pitch and in the dressing-room. You only have to think of John Terry who I played with in my time at Chelsea. Even in his younger days John was brilliant at keeping the group together whenever things weren’t going well. But it wasn’t just him. There was Frank Lampard and Didier Drogba and later they had Michael Ballack – big, forceful personalities.

More recently they had Diego Costa too. Whatever you say about Costa, and yes it might have been hard work managing him, he was a big character with desire and always ready for a battle.

He’s been a huge loss for Chelsea and I still can’t understand why he was allowed to go. Like the others I’ve mentioned he would drive the team forward in tough moments. That’s what big players do. They pull people together and lead by example but I don’t see those types of players at Chelsea now.