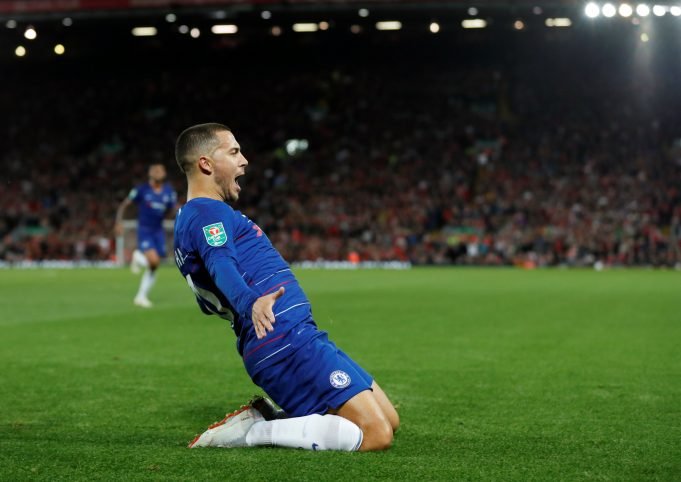 Chelsea and Belgium star Eden Hazard is one of the best footballers in the world and has been for some time now.

The Belgian is undoubtedly the best player in the Premier League at present and many have touted him to become the best in the world in the future.

Hazard led Belgium to third place in the World Cup this summer which is Belgium’s best ever World Cup finish. The 27-year old scored three goals and provided 2 assists as he received the Silver Ball for being the second best player of the tournament.

After an impressive World Cup, the Belgian has impressed in the Premier League so far. In 6 league games, he has scored 5 goals and has provided two assists. Hazard also helped Chelsea defeat Liverpool on Wednesday by scoring a terrific winner.

Many have opined that Eden Hazard is at the same level as Lionel Messi and Cristiano Ronaldo.

When asked how he felt about such comments, Hazard said, “At the moment, I am just scoring goals, so that is why everyone is talking for me to be in the top three. It is a pleasure to be there. I just want to keep going.”

My target is to win something every year, I want to win trophies. We won the FA Cup last year. We knew the Premier League is going to be hard because (Manchester) City, Liverpool, they have a lot of good players and good teams. So we will give everything.

It is not important how many goals I score. You know me, I don’t care about that. I just want to enjoy my football and win games.”

Hazard also said that Wednesday’s win over Liverpool was a preparatory match for when both teams meet again tomorrow.

He said, “The cup game was important for Saturday I think. After the draw against West Ham [last Sunday] we are back on top, we won against one of the best in the world at the moment, so Saturday we are going to be ready for the game.”

Chelsea are currently third in the Premier League table behind Liverpool and Manchester City. They have a chance of occupying top spot if they beat Liverpool at Stamford Bridge tomorrow.