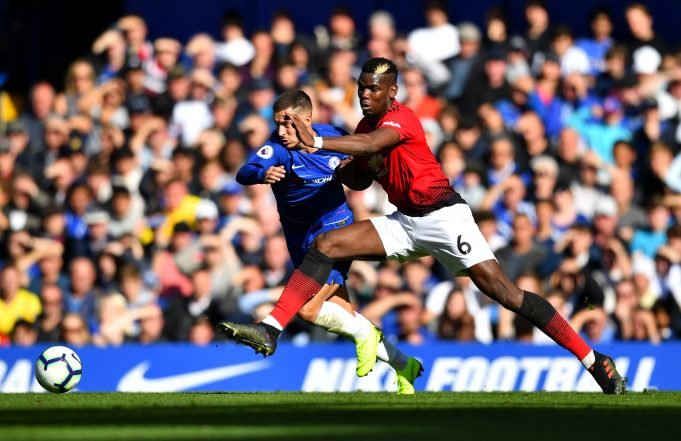 In the latest round of shockers, Chelsea winger, Eden Hazard has been dropped from this season’s PFA Team but Manchester United’s Paul Pogba has been included.

Manchester City and Liverpool, who are the only two contenders for the Premier League title understandably have filled up the entire list with their own players.

6 City and 4 Reds players have been named out of the possible 11. The only other name to find his way in is Pogba.

Based on pure statistics, the Frenchman has scored 13 goals and laid out 9 assists whereas Eden Hazard has racked up a tally of 16 goals and 13 assists in 34 appearances.

The Belgian has created 15 key scoring opportunities as opposed to Pogba’s 7. Not much can be made of the overall performances of the two teams since both are involved in the race for a top-four spot.

In fact, Manchester United are currently sixth in the standings whereas Chelsea are fourth with a 3-point lead.

Pogba has dropped in and out of form throughout the campaign with his teammates, Marcus Rashford, Romelu Lukaku, Anthony Martial stepping up to the plate.

Hazard seems to be the only attacking talisman in this Blues side with Olivier Giroud second in the scoring line with 12 goals for the season. The 28-year-old has led his team from the front throughout the campaign, even winning games singlehandedly like the one against West Ham United in April or the 1-2 victory over Watford on Boxing Day.

Pogba has had moments of brilliance this term and was at his best only after the introduction of Ole Solskjaer back in December. Since the past month or so, the 25-year-old’s influence has dipped as evident from the consecutive losses against Everton and Manchester City.

The only reason which could explain Hazard’s exclusion from the PFA Team Of The Season might be his position. With the likes of Raheem Sterling, Sadio Mane and Mohamed Salah performing at such at a high level, there was no way for Hazard to win a spot over the aforementioned names.

Salah had to take a backseat behind his teammate, Mane even though he is the top scorer over the Senegal international.

The Liverpool central midfield has seen a lot of rotation this season and none of them has actually stood out. With Kevin De Bruyne falling to recurring injuries, the attacking midfield spot has been left wide open for Pogba.

Chelsea FC Player of the Year