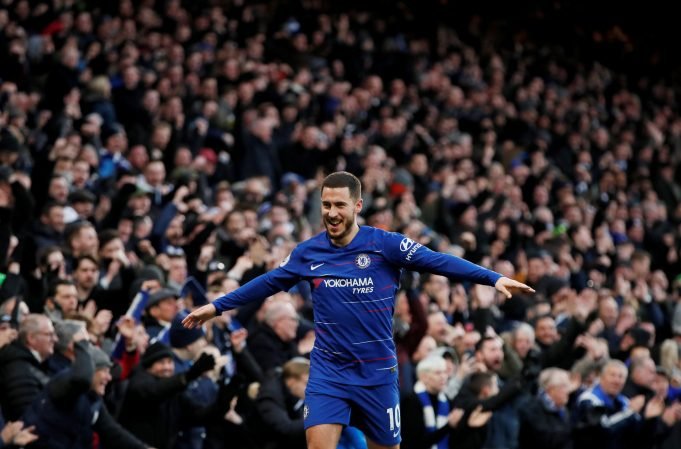 Hazard believes Sarri will be happy with the team’s performance

Eden Hazard believes manager Maurizio Sarri will be pleased with the team’s performance in the 5-0 drubbing of Huddersfield Town after the 4-0 humiliation against Bournemouth in the mid-week clash.

Hazard and Higuain scored braces and David Luiz capped off a dominant display from the Blues with a fifth goal in the dying stages of the game.

Sarri was absolutely livid with his players following their 4-0 defeat on the south coast, keeping the players locked up in the changing room for an hour-long inquest but Hazard believes the manager will be a lot more happy with the victory this time around.

“I always say when we lose a game, we need to win the game after, and we did well,” he told Premier League Productions. “We played one of the best games of our season and scored five great goals. The fans were not happy on Wednesday and now they are, so we are happy.

“I think [Sarri] will be happy because he was wanting a reaction from us and we gave him one.

“We are happy and we’re looking forward to playing Man City [in next Sunday’s EFL Cup final]. We need to keep winning like this. This kind of game is the way the manager wants us to play.

“After this game, our confidence is better than two days ago, but we play the champions [next], so we know it will be difficult. We beat them at Stamford Bridge, so why not again?”

Hazard is confident Higuain’s first two goals since his loan move from Juventus will be just the start of a productive partnership.

“We try to work with each other,” said the Belgium star. “Higuain is a new player but he knows what the manager wants. He is a great striker and he can score a lot of goals. England is different than Italy and Spain, but he has that ability.”