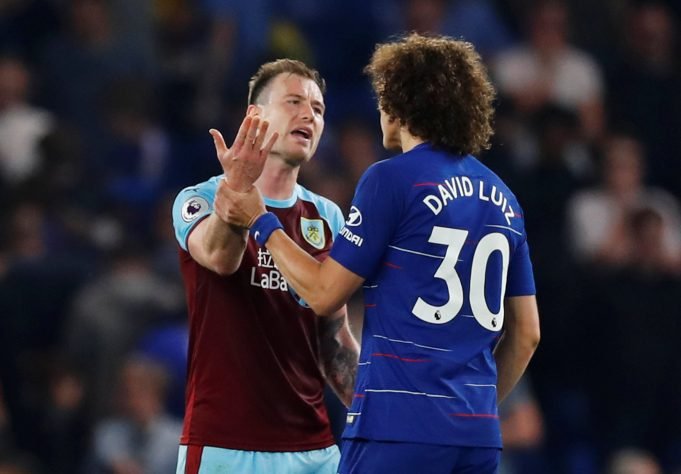 Chelsea defender David Luiz was far from impressed with the kind of football Burnley played last night at Stamford Bridge. Last night’s match between Chelsea and Burnley began in the best possible as four goals were scored within the first 25 minutes.

Burnley opened the scoring after just 8 minutes thanks to Jeff Hendrick. However, N’Golo Kante brought Chelsea level in the 12th minute before Gonzalo Higuain put the Blues ahead in the 14th.

Burnley managed to equalise thanks to Ashley Barnes in the 24th minute. The remainder of the match saw no more goals and the both sides won a point each.

Following the match, David Luiz slammed Burnley’s approach to the game. The Brazilian said, “We tried everything to win the game, but it’s difficult playing a team who has two chances, score two goals, but didn’t want to play the game. For me, the authority on the pitch is the referee, and when he is not there to try to check what he has to do on the pitch, it’s difficult.

They were trying to time waste from the first minute of the first half, and then it was anti-football so it’s difficult to play against.”

Tempers began to flare during the match as Maurizio Sarri was sent off during the closing stages of the game.

Sarri’s second-in-command Gianfranco Zola also slammed Sean Dyche’s boys for their tactics. The former Italy international said, “I think in the second half we didn’t play much football. There was a lot of time-wasting and we felt five minutes wasn’t enough to compensate for all the lost time and lost rhythm. We are not very happy. I understand Burnley’s approach, but we’re very unhappy. Five minutes wasn’t enough [stoppage time].”

With the draw, Chelsea moved to 4th place in the league table and are level on points with Spurs. Their next match is a toughie against Manchester United at Old Trafford on Sunday. Ole Gunnar Solskjaer’s men have a match to play before taking on Chelsea- the Manchester Derby tomorrow night.

Also Read: Sarri sending off might provoke Chelsea to complain against Burnley