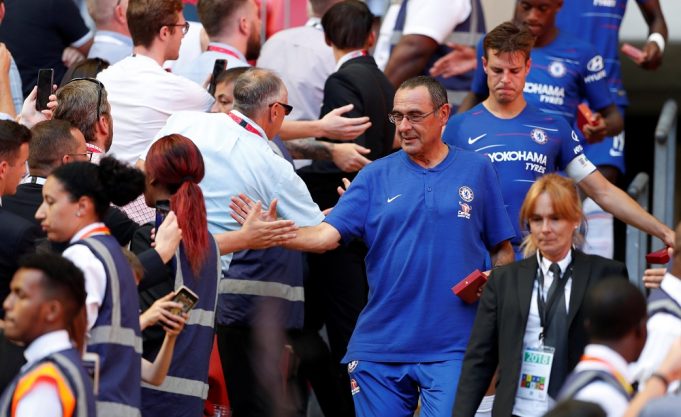 The 59 year old arrived from Napoli in July

Chelsea completed the signing of Kepa Arrizabalaga from Athletic Bilbao for a reported fee of £72 million. He has signed a 7 year contract with the club.

The Spain International is the Blue’s third signing this summer, after securing Jorginho from Napoli and Mateo Kovacic on a season long loan from Real Madrid.

He was bought in as a successor of Thibaut Courtois, who completed a move to Champions League winner on Wednesday. The Belgium International has been stalling on signing a new contract extension and even missed the training to force through a move.

Kepa has claimed that Sarri’s aggressive style will suit him and believes he will thrive under him at Stamford Bridge. However, he described himself as a calm, settled goalkeeper.

“I’ve heard great things about him, great references. I can’t wait to see that first hand, to meet him and work with him.

“I think his style is not too different from the style used in the Spanish national team. I believe my qualities will fit in well with this style. I personally like his style. It’s aggressive, he likes to attack, putting pressure on the opposition and I like that.

“I would say that I am a calm, settled goalkeeper. I think I try to convey a calmness to the team, so they feel they have behind them a goalkeeper that is in control.”

“I know all the Spanish players that I have played with in the various age groups for Spain,” he added.

“I have spoken to various players before I came here: [Cesar] Azpilicueta, [Alvaro] Morata, Pedro.

“I had excellent references from them about the club, knowing them and being able to talk to them.”

“What attracted me to Chelsea? Everything, all the titles the club has won, all the players at the club, the city, the English Premier League.

“It is an accumulation of things really and I am delighted that the club has signed me.”

Read Also: Chelsea ace has backed Kepa Arrizabalaga to live up to his price tag