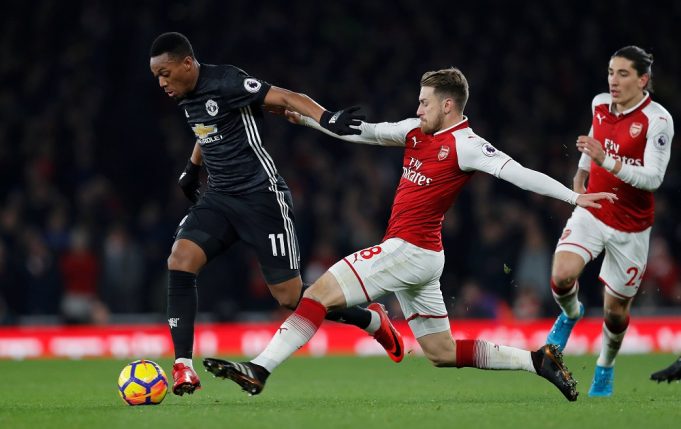 Another Premier League club could also be interested in him

Chelsea were surprisingly linked with a move for Aaron Ramsey before the transfer deadline but a deal never materialized. Arsenal’s new manager Unai Emery was keen to keep him at the club at least for this season.

The Wales International joined the Gunners from Cardiff for a reported fee of £4.8 million in 2008. He has been a mainstay in the midfield since joining them, scoring 58 goals in 330 appearances in all competitions.

The player was a regular for the London Outfit last season , scoring 12 goals and assisting 9 in 36 appearances in all competitions. He has featured in all the fixtures so far this season amid uncertainty over his long term future with the club.

The 27 year old has entered the final of 12 months of his current deal and yet to commit himself to a long term agreement. Talks have been going on with his representative for a new contract over the past few months that have yet to result in agreement.

Former Arsenal star Nigel Winterburn believes the Blues will make a move for the midfielder if he doesn’t sign a new contract extension and becomes available for transfer.

“With less than a year remaining on his contract, Ramsey is in a very strong negotiating position and is also a very attractive proposition for a lot of big clubs around Europe,” Winterburn told Sportingbet.

“I think Manchester United and Chelsea will both battle it out to sign him if they feel he is seriously considering leaving Arsenal.

“I don’t think he could get into the Manchester City and Liverpool teams, but it would hurt Arsenal fans to see another of their superstars leave to a Premier League rival.

“I hope Ramsey signs a new contract at Arsenal.”