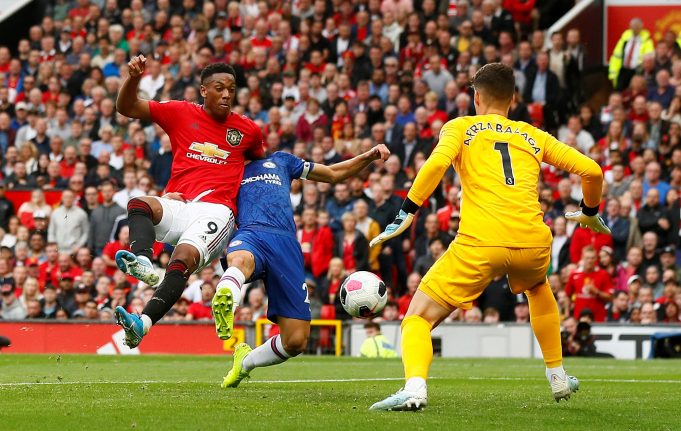 Chelsea vs Manchester United prediction today for Sunday’s Premier League match at Wembley Stadium. These two sides are about to face off against each other in the 2019/20 FA Cup semi-final. Locked in an intense battle for top four in the league, gaining a place in the FA Cup final will definitely be a bonus for both teams. Read on for all our Chelsea vs Manchester United prediction and free betting tips.

Chelsea vs Manchester United betting odds today – who will win according to the betting odds?

Our Chelsea vs Manchester United betting tips and predictions

We expect a Chelsea win at 3.00 with Unibet. Below you can read the reasons for our Chelsea vs Manchester United betting tips prediction.

We expect Tammy Abraham to score first at 6.50 with Unibet

Here are a few Chelsea vs Manchester United free bets and special offers from the betting companies:

Reasons For Chelsea vs Manchester United Prediction And Betting Tips

The Chelsea squad are not the favourites to win this match 3.00 with Unibet, with Manchester United priced at 2.40 with Unibet to go through to the FA final.

Given their performances this season, it’s not hard to see why Chelsea are the price they are. Frank Lampard’s men are third in the Premier League table but they have been equally inconsistent as their Sunday opponents this season. Plus, they have failed to get past Ole Solskjaer’s side three times this season putting up lacklustre performances each time. Something has not clicked against the Red Devils and it shows at odds of 3.00 with Unibet.

Manchester United are not the clear favourites and very rarely will they ever be in this fixture. But they are looking much more solid after the return of Paul Pogba into the side. The Red Devils are finally playing some attractive football with Bruno Fernandes and Pogba pulling the strings from the middle. Their chances of progressing are higher at 2.40 with Unibet.

Speaking of quality, this will be an opportunity for Tammy Abraham to get back to his scoring form. He has been handed odds of 6.50 with Unibet to score the first goal.

Chelsea face Manchester United at Wembley Stadium on Sunday evening. Both teams need the win to progress to the next round of the competition.

The Blues came back strong since the restart but have dropped their intensity recently. Following a disappointing 3-0 defeat against Sheffield United, they did not look too convincing against a relegated Norwich City.

The Red Devils have been firing on all cylinders these past few weeks. Their attacking lineup has been drilling in goals left and right but this side is still far from perfect, evident from their 2-2 draw against Southampton.

Chelsea fans were pleased to see Matteo Kovacic return to full fitness against Norwich City. N’Golo Kante is also tipped to be back after missing the last game through a hamstring pull. Only Billy Gilmour is the long-term absentee with Frank Lampard having the remainder of the squad to pick from.

Andreas Christensen might retain his spot in defence next to Antonio Rudiger while Jorginho fills up in the midfield pivot. Christian Pulisic and Willian are likely to fill up next on both sides of Olivier Giroud in strike.

As for Manchester United, Ole Gunnar Solskjaer has already expressed his frustrations with unfair rest period provided to his side compared to the Blues. He will also have a real headache at left-back since both Luke Shaw and Brandon Williams had to be taken off in the 2-2 draw against Southampton.

The likely and only replacement might be Diogo Dalot in the spot with Harry Maguire, Victor Lindelof and Aaron Wan-Bissaka filling up the back four. Axel Tuanzebe and Phil Jones are ruled out for this tie as well with Mason Greenwood a minor doubt. The latter suffered a crunching tackle from Oriel Romeu that left its mark after the game.

We can still see a front lineup of Marcus Rashford, Anthony Martial and Greenwood. A midfield partnership of Paul Pogba and Bruno Fernandes is the favourite choice with Nemanja Matic filling up behind them.