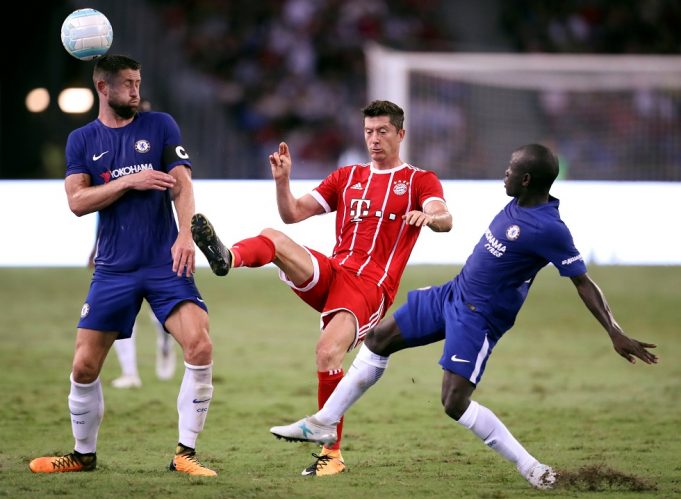 Chelsea vs Bayern Munich betting odds today – who will win according to the betting odds?

Our Chelsea vs Bayern Munich betting tips and predictions

We expect a Chelsea win at 4.50 with Unibet. Below you can read the reasons for our Chelsea vs Bayern Munich betting tips prediction.

We expect Tammy Abraham to score first at 7.50 with Unibet

Here are a few Chelsea vs Bayern Munich free bets and special offers from the betting companies:

Reasons For Chelsea vs Bayern Munich Prediction And Betting Tips

The Chelsea squad are not the favourites to win this away tie at 4.50 with Unibet, with Bayern Munich priced at 1.78 with Unibet to gain an advantage in the first leg.

Given their performances this season, it’s not hard to see why Chelsea are the price they are. Frank Lampard’s men are fourth in the table but are still very much a work in progress. Their recent drop in form will tell you why. However, the Blues collected an inspiring win over London rivals, Tottenham to hand them a boost of morale.

Bayern Munich had a shaky start to the campaign but seemed to have straightened things out. They are back on top of the Bundesliga after beating a very resolute Paderborn side on the weekend. They are still the European heavyweights given the strength of their side. 1.78 with Unibet.

Speaking of quality, this will be a chance for Tammy Abraham to return to the starting lineup which is why he has been handed odds of 7.50 with Unibet to score the first goal.

Chelsea face Bayern Munich at Stamford Bridge on Tuesday evening. Both teams need the win for different reasons, with the Blues looking to end their two-game losing streak.

The Blues have been pretty impressive in their domestic campaign under Frank Lampard but will have to prove their mettle in Europe. Without a lot of key players, Chelsea could find it hard to put a dent against such top opposition.

The German giants are slowly edging back to their best self under Hansi Flick but are not exactly air tight in defence. Bayern are also under the pressure of making it past this round after failing to do so last season.

These two sides have met each other four times before. One of those matches was the 2011/12 Champions League final which Chelsea won through penalties.

Chelsea could have Tammy Abraham back in their starting lineup after coming off the bench against Tottenham. Willian could also start in place of Ross Barkley but Christian Pulisic and Callum Hudson-Odoi have not yet recovered from their respective injuries.

Frank Lampard is tipped to go with a back three against this strong a Bayern side. That means Cesar Azpilicueta could feature despite picking up a knock against Spurs. The prospects of N’Golo Kante appearing on the pitch is still uncertain. The Frenchman limped off early last weekend and will need to be assessed further. For now, Jorginho and Matteo Kovacic are the best options centrally.

As for Bayern, Hansi Flick has a decision on his hands regarding his backline. If he were to take on a back-three, Alvaro Odriozola and Alphonso Davies could feature as wing-backs. Thomas Muller and Kingsley Coman are pushing for recalls to the starting lineup but Philippe Coutinho could hold his spot behind Robert Lewandowski.

LATEST: Will Ruben Loftus-Cheek be able to help Chelsea get the fourth spot this season?

LATEST: Will Ruben Loftus-Cheek be able to help Chelsea get the fourth spot this...

LATEST: Will Ruben Loftus-Cheek be able to help Chelsea get the...