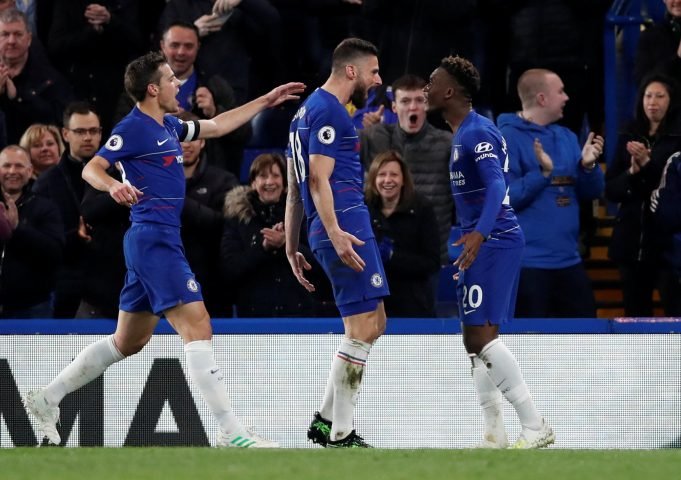 Chelsea racked up a convincing win over Brighton & Hove Albion on Wednesday night through goals from Olivier Giroud, Eden Hazard and Ruben Loftus-Cheek but it was not the ay of the three, the Blues fans were raving about after the game.

Callum Hudson-Odoi was a surprise name in the starting lineup and within minutes from the opening whistle, the youngster proved to everyone why he deserves to be there on a regular basis.

Other than terrorizing the Seagulls backline from the right flank, the England international assisted Giroud for the first goal. He took on a Brighton defender and then drilled in a grounded cross towards the Frenchman who guided the ball into the back of the net.

After the match, Giroud said, “It was a good cross and a good finish. The keeper was on the ground so I put it in the air. I was happy for the team and myself.”

When speaking about his serviceman, the 31-year-old forward added, “I’m not surprised (about Hudson-Odoi). He’s improving. He’s got huge potential. I’m sure he will become a top, top player. He needs to play in more games but it’s coming. He’s a good player and a good man in the dressing room. England can be happy to have him.”

“When I’m on the pitch I try to help my team to win and try to score when I have an opportunity. We need to keep this up. We’ve shown some great character. We scored nice goals. It’s good for the future. We need the momentum now.”

Talking about Hazard stunning strike, he added, “It was typically what he can do in training – dribbling past one player and shooting. The keeper was a bit unlucky with the goals because Ruben Loftus-Cheek’s goal was top corner.”