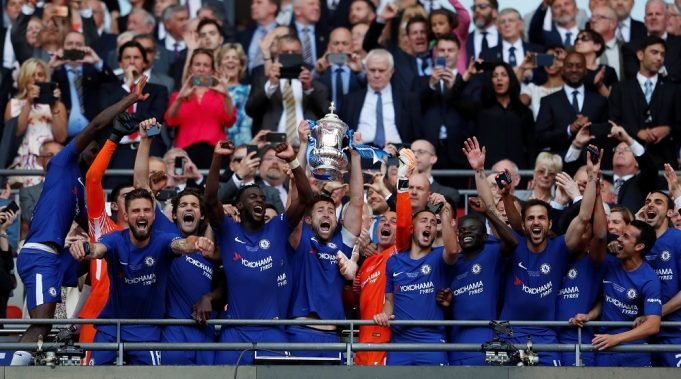 The Italian is still linked with a summer exit

Gary Cahill is relieved as the season is over as they can now refocus in the summer but also wants the directors of the club to resolve former Juventus manager’s future.

“I probably want the uncertainty to be put to bed and for whatever is going to happen, to happen,” Cahill said at Wembley as quoted by Goal. “Naturally, we will see what happens with the club. I don’t really want to speak about it. Today is about celebrating the FA Cup. It is out of our hands.

“We fell short in some aspects this season but today we produced and the rest behind the scenes is not down to us. So we will wait and see. This summer, a lot of the lads have got big summers ahead. I am going to chill out of six days and take my mind away from football and look forward to the tournament with my national team.

“I feel a sense of uncertainty and I think that’s obvious to everybody in the last few months. What I can say, obviously we as players have no impact on that situation. I am sure, if I was a guessing man, they will have spoken between the club and manager. Let’s see, I am sure the manager will make the best decision for him and his family.

“I am sure the club will make the best decision for what they feel. I am not dodging the question but it is totally out of our hands, we just sit on the side. What I can say, it has been a great finish. If he stays on next year, then he stay on. If he doesn’t then we have ended with a Premier League and FA Cup.

“I think that is something that everyone at this club can be proud of, even the people behind the scenes who you don’t see. They work tirelessly behind the scenes and it is a long slog of a season. Everyone feels like we have got our reward now and we are going to celebrate and have a good time.

“We are going to celebrate all together as a team, as a tight-knit family. As I said, you have to enjoy these moments and they don’t come around every day. Who knows whether we will be in another FA Cup final, you never know, so enjoy the moment. I think the whole season almost built up to this day, where we had to try and rescue and produce today.

“That goes for all the staff and everyone who delivers behind the scenes. We had to try to deliver a trophy. When you look at it in terms of last year we got the Premier League title and this year was the FA Cup, it is not too bad. Two years, two titles and one runners-up. Like I said the other day, for me that is success.”