Chelsea FC Latest News .com
Home Serie A AS Roma Chelsea unveil their away kit for the upcoming season 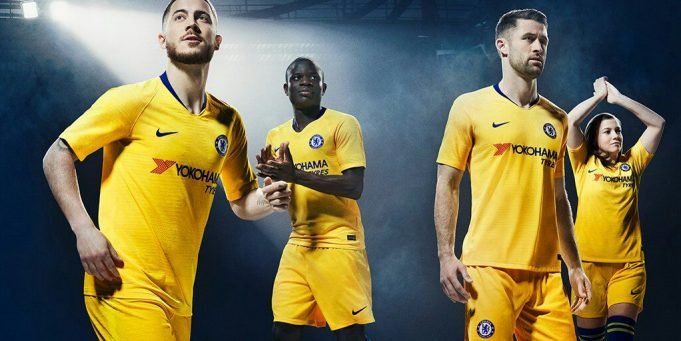 Nike Football and Chelsea today launch our new away kit for the 2018/19 season.

The new away kit bring back the yellow scheme which was famous with regular appearances during the 1960s and throughout the 1980s and ‘90s.

The website say that, “it is the first time we have unveiled a yellow kit since our Premier League-winning 2014/15 season”

The site also say that, “the yellow shirt and shorts are complemented by a pair of rush blue socks which feature a yellow band across the shin. The custom Knit Tape along the back neckline of the shirt allows improved stretch ability across the kit, enhancing players’ movement and agility”

“On the inside neckline sits a lion from the club crest. Around it reads ‘Football is the game’, the second line of ‘Blue is the Colour’, our famous anthem and the first line of the song, which features in the home shirt and provides continuity between home and away kits”

Chelsea are one of eight teams this season to be sponcered by Nike  — alongside PSG, Barcelona, Manchester City, Inter Milan, Roma, Atlético Madrid, and Spurs.

The new 2018/19 Chelsea away kit will be worn for the first time on Saturday 28 July against Inter Milan in Nice, and will be available at Nike.com/Chelsea and the Stamford Bridge Megastore from today.