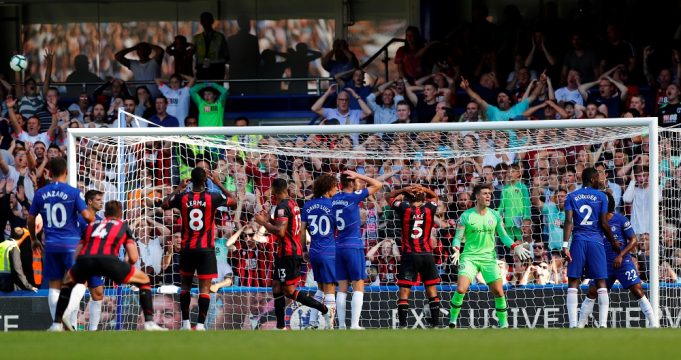 Chelsea signed Kepa Arrizabalaga from Athletic Bilbao this summer transfer window for £71 million which made him the world’s most expensive goalkeeper, overtaking Liverpool’s transfer fee for Alisson Becker.

The Spaniard was the second summer signing under new manager Maurizio Sarri this summer and was brought in as a replacement for Thibaut Courtois. The Belgium International forced a move to Real Madrid as he wanted to be closer to his children.

The Blues have started this campaign in a brilliant way, won the first 5 Premier League fixtures and drew the next 2. The 24 year old has featured in all the matches, keeping 3 clean sheets in the process as they are 2 points off top of the table.

The goalkeeper put in one of his best displays on Thursday night as the London Outfit were made to work for a win in the Europa League against against MOL Vidi at Stamford Bridge. They are still unbeaten across all the competitions.

Kepa has thanked Sarri for showing confidence in him and claimed he is enjoying life at Chelsea. Though he admitted that he still is adapting to the physicality of the English game.

“There are differences with the Spanish football,” Kepa said to Omnisport as quoted by Goal. “The player is less protected, inside the box as well. So, the rhythm is high but at he end of the day is football and it is the atmosphere around very nice.

“I am happy, especially for the victory of the team. It is true it has been tougher than it should have been. It has been hard to get the goal, even though we did have some chances to make it earlier, but we didn’t get the goal. However, I think we did a good game and we control the possession. I am happy to get the three points.

“It’s normal that when someone pay that amount of money they talk about your transfer. You have to show your value but I am not focused on my price, I am just trying to do my job. I am really grateful for his confidence to sign me. Obviously he was key for me joining the club. I feel really comfortable on the way he likes to play, I am so happy and grateful.”