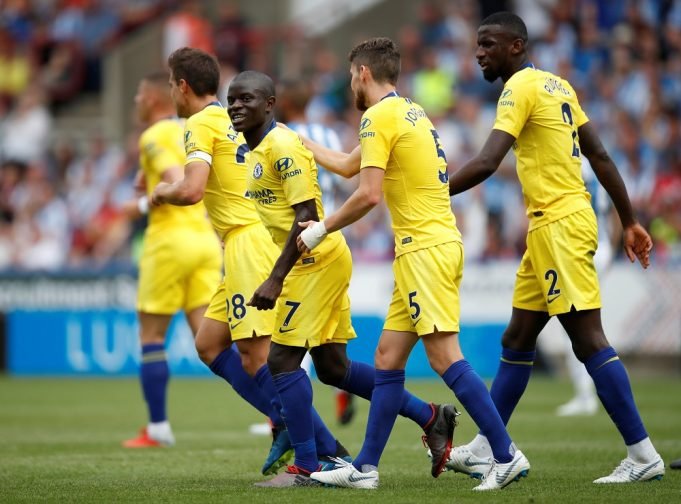 The player was impressive against Huddersfield

The London outfit finished 5th in the League last term and will miss Champions League in this season. Despite that the 27 year old was one of the standout players and played a key part in the FA Cup final win against Manchester United.

The France International managed to make 47 appearances for the club in all competitions and was also awarded the club’s Player of the Year prize for the 2017/18 campaign.

The midfielder was pivotal for the France team in this year’s Word Cup and helped his nation to lift the trophy after 20 years. He has returned to club duty after post World Cup holiday and the started in the opener against Huddersfield.

He volleyed in the first goal to help new boss Maurizio Sarri commence his debut Premier League season with a 3-0 win as he adjusted seamlessly from defensive-minded anchor to influential box-to-box contributor.

Kante is confident he can adapt to a more attacking role in Chelsea’s transformed playing style.

“Now the system is ­something ­different, especially the way we play now,” Kante told the Mirror.

“So, even during the ­holidays, we were thinking and talking about how to adapt. It will require a lot of sacrifice from us all, so that is why I have to continue ­moving forward as a player.

“I have worked with ­different managers in the past and different systems.

“The best way to always keep your position [in the team] is to ­remain focused and have the same attitude towards ­everyone. So that is what I am going to try to do again this season.”