Here is the Chelsea vs Leicester City predicted line up and the starting XI for Chelsea today at King Power Stadium!

Chelsea players vs Leicester City will be tricky to tell. Thomas Tuchel has picked players very specifically in certain games. He is also a coach who gives most of the squad fair chances.

Tuchel is likely to resort back to his three-center-back policy. In goal, we can expect Mendy to continue. In the back five, Reece James should be at right wing-back with Ben Chilwell as a left wing-back. The centre-backs should be Cesar Azpilicueta, Thiago Silva and Antonio Rudiger.

A two-man midfield with N’Golo Kante and Jorginho should be at the base. They should have Hakim Ziyech and Kai Havertz ahead of them.

Callum Hudson-Odoi could be thrown in at centre-forward. Both Timo Werner and Romelu Lukaku are out with their respective injuries. 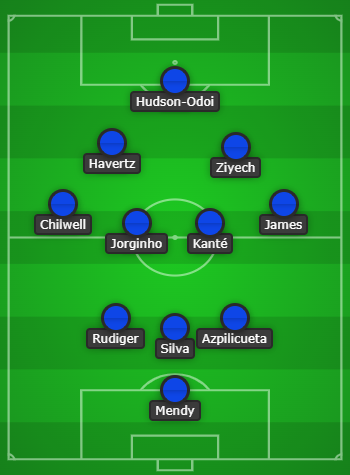 We can expect a tired showing since both sides have players coming from back-to-back league games. This means the same players could reappear from the last games, a bit fatigued. Here we will give you an answer to the most frequently asked question about Chelsea – Leicester City.

The Blues are known for their defensive resolve and it was a surprise to see Chelsea lose against Manchester City a few weeks back.

The Foxes had the worst start to the campaign and are currently sitting 12th in the league table.