What will be the Chelsea predicted line up vs Aston Villa?

Chelsea players vs Aston Villa will be tricky to tell. Thomas Tuchel has picked players very specifically in certain games. He is also a coach who gives most of the squad fair chances.

In goal, we can expect Mendy to continue. In the back three, Andreas Christensen is ruled out. Thiago Silva, Cesar Azpilicueta and Antonio Rudiger are tipped to form the back three with Marcus Alonso and Reece James covering the flanks.

Jorginho and Kovacic could form the engine room with Saul Niguez expected to feature in the second half.

In attack, we can expect Hakim Ziyech and Mason Mount on the wing. Romelu Lukaku will be leading the line from upfront. 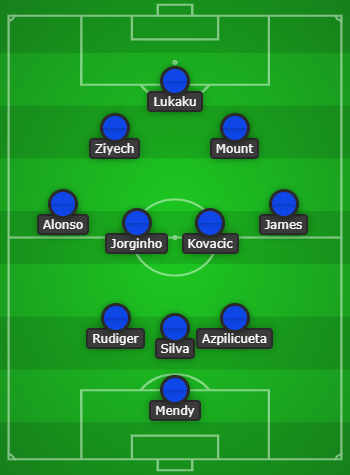 Chelsea takes on Aston Villa in the Premier League clash. The Blues drew Liverpool in the previous game and are now fourth in the table.

The Blues suffered draws against Everton and Wolves in the last two weeks and will be looking to gain the top spot in the league table. They looked dominant in the 2-0 win over Brentford, making a strong claim in the Carabao Cup.

Aston Villa can’t possibly finish any higher. They are simply looking to push the top sides as much as they can.

The Chelsea squad will be without first-team players such as Ben Chilwell, Mateo Kovacic, Kai Havertz, Romelu Lukaku and Jorginho.

Trevor Chalobah will be nursing the hamstring injury he suffered against Watford.

Marcos Alonso, Mason Mount, Thiago Silva will be called upon for this tie.

As for Aston Villa, they will be without the services of Leon Bailey and Bertrand Traore.

Tonight’s match is the 160th meeting between Chelsea and Aston Villa. The Blues have collected 66 wins while Aston Villa have managed 58 for themselves and the other 35 games ended as draws.