Chelsea Predicted line up vs Arsenal!

What will be the Chelsea predicted line up vs Arsenal?

Chelsea Predicted Line Up vs Arsenal

Chelsea players vs Arsenal will be tricky to tell. Thomas Tuchel will have to rest his key players so they are fresh enough to face Real Madrid once again.

Chelsea Predicted line up vs Arsenal

In goal, we can expect Mendy to continue. In the back three, Kurt Zouma is ruled out. Cesar Azpilicueta, Andreas Christensen and Antonio Rudiger are tipped to form the back three with Marcus Alonso and Reece James covering the flanks.

Jorginho and N’Golo Kante could form the engine room with Mason Mount in front of the two.

In attack, we can expect Christian Pulisic and Timo Werner to pair up. Romelu Lukaku can feature in the second half of the game. 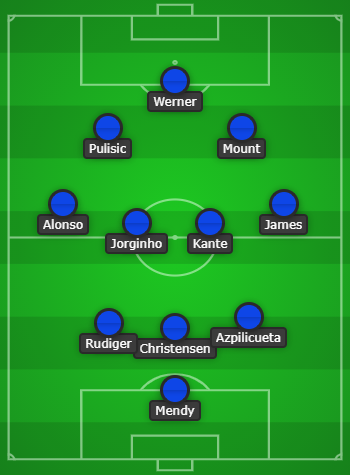 The Blues had a strong start to the new campaign by winning the UEFA Super Cup and their Premier League opener against Crystal Palace.

Arsenal have been woeful last season and started the new season with a disappointing loss against Brentford.

Tonight’s match is the 204th meeting between Chelsea and Arsenal. The Blues have collected 65 wins while Arsenal have managed 80 for themselves and the other 58 games ended as draws.