Chelsea Predicted line up vs Arsenal!

What will be the Chelsea predicted line up vs Arsenal?

Chelsea Predicted Line Up vs Arsenal

Chelsea players vs Arsenal will be tricky to tell. Thomas Tuchel will have to rest his key players so they are fresh enough to face Real Madrid once again.

Chelsea Predicted line up vs Arsenal

Tuchel is likely to continue with his three centre back policy. In the goal, we can expect Mendy to continue. In the back five, James should be at right wing-back with Marcos Alonso as left wing-back. The centre backs should be Cesar Azpilicueta, Antonio Rudiger and Thiago Silva.

A two-man midfield with Kante and Jorginho should be at the base. They should have Mason Mount and Hakim Ziyech ahead of them.

Timo Werner could be thrown in at centre-forward. Romelu Lukaku should be given a breather. 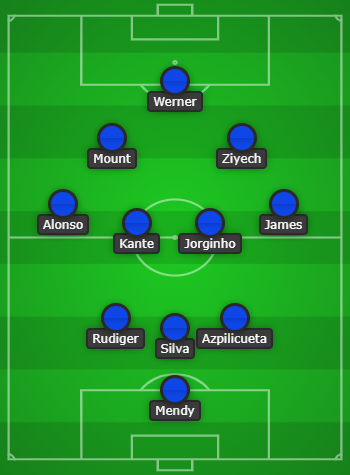 The Blues have recently cemented their place in the FA Cup final against Liverpool.

The Gunners hold the bragging rights with 80 wins against the Blues but have struggled to collect wins in their last five league games.

Tonight’s match is the 205th meeting between Chelsea and Arsenal. The Blues have collected 66 wins while Arsenal have managed 80 for themselves and the other 58 games ended as draws.