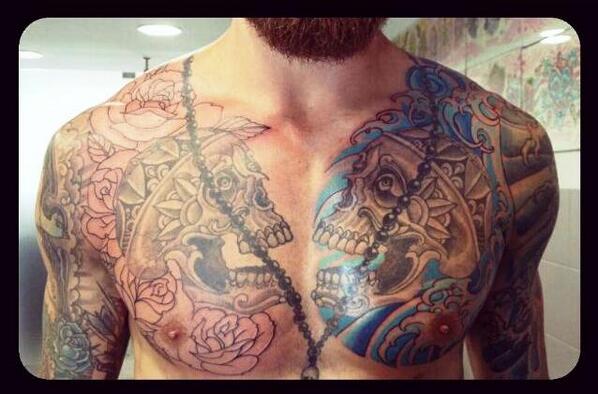 Here are the Chelsea players tattoos 2018

Some tattoos can be football related or others are more personal to them- such as tattoos representing their family.

But here we will look and see which Chelsea players have tattoos.

Former Chelsea star Raul Meireles was covered in tattoos. The former Blues midfielder is probably most fondly remembered for the great goal he scored in the Champions League against Benfica. But he also happens to be covered in pretty awesome tattoos too.

I have to say, Raul Meireles really does suit having tattoos along with his beard and Mohawk.

As you can see, Chelsea star Kenedy is covered in tattoos. I like his neck and leg tattoos the best. Kenedy is on loan at Newcastle and it’s not clear yet if he’s returning to Chelsea or not.

Chelsea star Cesc Fabregas with his wife on a boat on holiday. Fabregas has a cool and unique tattoo placement. It’s not a half sleeve and it’s not on his forearm or his upper arm- it’s in between. I like it a lot.

Eden Hazard got a tattoo i=on his right arm in a tattoo parlour in Fulham in February 2017. The tattoo parlour posted a photo and caption stating: “Chelsea’s main man popped in today @hazardeden_10 for a 4 hour session. First of many. Started a half sleeve. Top man, top banter and top top player.

“He ain’t going nowhere by the way Chelsea fans”

Olivier Giroud has a tribal tattoo on his upper arm which extends down to his elbow and forearm.

Which Chelsea players have the best tattoos? I like Cesc Fabregas tattoo the most. It’s simple but also unique. Many footballers tend to get the same kind of tattoos so it’s refreshing to see different type of tattoo.

Italian Football TV reported last to last year on 16, May, 2017 about Emerson’s new tattoo on his forearm while he was playing for AS Roma.

He has tattoo on both his arms.

Kovacic feels Blues still have a lot of room for improvement

Kovacic feels Blues still have a lot of room for improvement