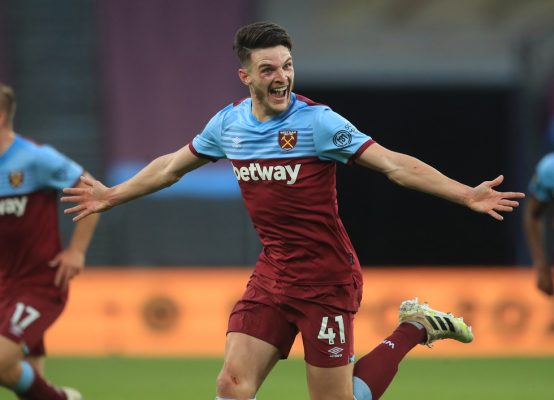 Chelsea have given up on their chase for Declan Rice after Frank Lampard was sacked.

It was primarily the former Blues boss who wanted Rice at Stamford Bridge.

Even after spending nearly £220m in the summer transfer window, Lampard made a final attempt to sign Rice. West Ham United’s £80m eventually saw all roads blocked over a potential deal but Lampard did not let up.

Reports continued to link Rice with Chelsea over a future deal. Roman Abramovich almost always backs his managers if he believes in them. Fans were certain that an additional £80m would have sprung up in the coffers if Lampard had a grip over his Chelsa role.

Rice is a former Blue, having been released from the academy at 14. He and Mason Mount are the best of friends but a reunion seems unlikely now. Liverpool are the ones who have a clear shot at him, owing to their defensive issues.

Chelsea new boss, Thomas Tuchel could demand a completely different breed of talents with plenty of outgoings ready to be sanctioned first. Also, outcasts like Kepa Arrizabalaga, Jorginho, Antonio Rüdiger and Marcos Alonso could get a second opportunity under the new boss.