Chelsea have been fired a strong warning ahead of their semi final clash in the Europa League against Eintracht Frankfurt.

“We are the ultimate outsider,” sporting director Bruno Hübner said in an interview with kicker. “But this is a role we have played well in the Europa League and so far we have been up to our task and believed in our chances.”

“Chelsea can expect an atmosphere they have never felt in any shape or form yet,” Hübner insisted. “And our fantastic support will help our team to play a good game.”

The Blues have had a brilliant run in the Europa League. They have played over 10 matches in the competition and are yet to lose a single game.

They have put out their strong sides in the later stages of the tournament because Maurizio Sarri’s men have realised that the Europa League can provide a strong route for the Blues to make it to the Champions League next season.

They are also in the race for the top four but with the likes of Arsenal and Manchester United contending as well, Chelsea will want to do well in the Europa League. 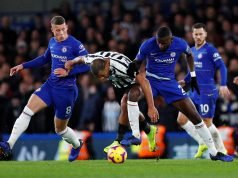