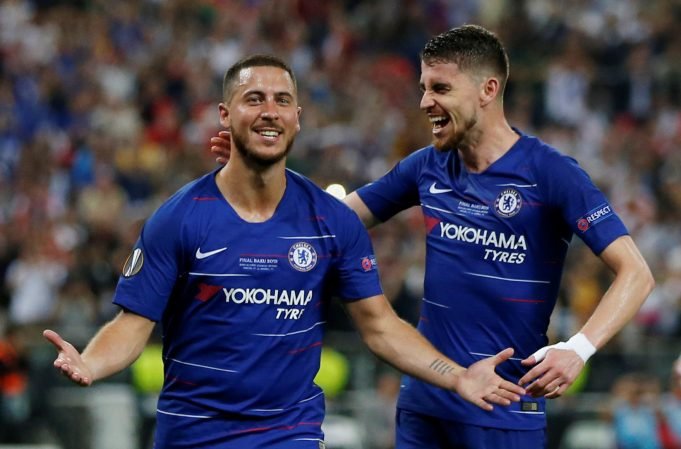 Chelsea fans are urging Frank Lampard to overlook Jorginho for the number 8 spot and hand it over the club’s academy product, Mason Mount.

The 20-year-old scored an outstanding freekick in training which amazed the Blues faithful enough to make this plea.

Another said, “New contract. New era Lampard. New no.8. Please and thanks.”

“Give him that number 8 already,” another added on Twitter, while another said, “Best be a starter next season.”

“We might actually have someone good at set-pieces,” claimed one of the West Londoners.

Now, of course, Mount’s credit is not drawn from one simple freekick in training. He was really impressive in the Derby County ranks last season, scoring 9 and laying out 4 assists.

The midfielder was instrumental in the Rams’ run for Premier League promotion under Lampard. His development has progressed well with him spending the 2017/18 campaign with Dutch outfit, Vitesse.

Jorginho, on the other hand, struggled to impress term after tying down a £57m move from Napoli. He only collected 2 goals and set up zero assists in over 50 appearances under Maurizio Sarri.

Now, Frank Lamapard has returned to Chelsea with an open mind of giving every player a fresh chance. However, the 41-year-old is also eager to promote youth talent and we might see a different midfield trio in the upcoming campaign.