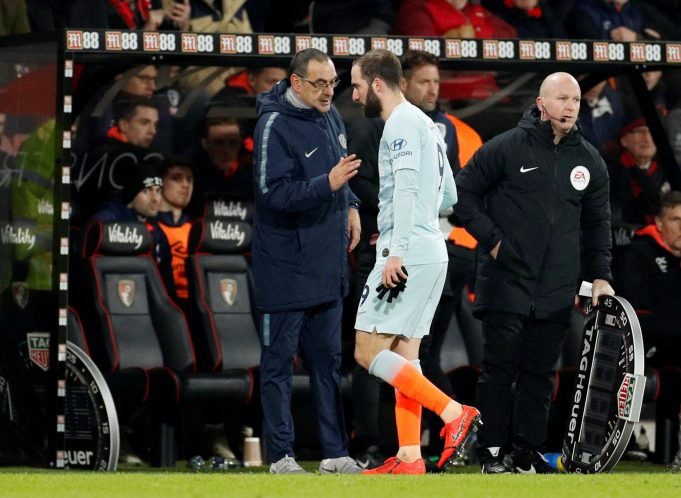 Sarri defends his decision to take Higuain off after 65 minutes

Maurizio Sarri’s decision to take Gonzalo Higuain off at 65 minutes prompted some of the travelling Chelsea fans to chant “You don’t know what you are doing” at the manager.

Chelsea slipped out of the top four after a disastrous 4-0 defeat at the hands of Bournemouth on Wednesday night, with Arsenal leapfrogging them in the race for the top four.

After a goalless first-half, the Blues collapsed dramatically in the second half following Joshua King’s opener.

King once again did brilliantly to set up David Brooks for the second goal and the Norwegian added his second of the night in the 74th minute to complete a brace.

Charlie Daniels rubbed salt on Chelsea’s wounds and scored in stoppage-time to cap off a famous victory for the Cherries.

Gonzalo Higuain was handed his first Premier League start but the 31-year-old was subbed off after 65 minutes, much to the displeasure of the travelling Chelsea fans.

Sarri, however, justified his decision to take the striker off by saying that he lacked match fitness.

Sarri added: “I can understand everything but Higuain is not at the top at the moment. In the last 40-45 days he’s played few matches because of his injury to his back and then he was involved in the market so he didn’t play a lot in the last period.