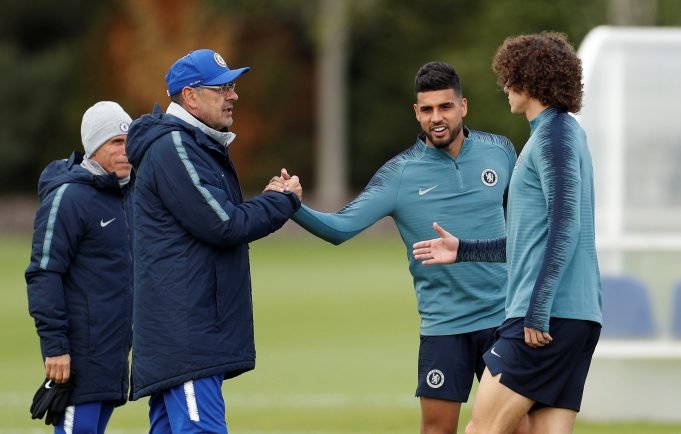 Chelsea defender, Emerson Palmieri has hinted on a possible transfer to Juventus this summer.

Right after news came out that Maurizio Sarri would be leaving the Blues to succeed into Massimiliano Allegri’s spot in Turin, it was claimed that there were two players the Italian would like to take back with him.

One, out of two was reported to be Palmieri, mostly because of his prior experience in the Serie A. Chelsea signed the left-back from AS Roma for a price of €20m and 18 months later, he is still struggling to break into the first-team.

Let’s just admit that the 24-year-old has not adjusted to the Premier League as well as the Blues would have liked. While he is dangerous going forward, his defensive lapses make him a liability that the team simply cannot afford.

“I don’t know if Sarri is going to Juve, you would have to ask Chelsea or Juventus that,” he revealed to the press this week. “For myself, I have a contract with Chelsea and I’m happy here, especially after the Europa League but I haven’t been told anything.

“Everyone says that the Allianz Stadium could be my new home but I’m a quiet person and I’m calm. I try not to think about these things.”

Chelsea can try to recoup whatever value they lost on Palmieri or they can choose to keep him through the season-long transfer ban. If the 24-year-old were to leave, the Blues will not be able to sign a replacement and will have to solely depend on Marcos Alonso to take up the left-back role.

Of course, this could also be a chance for Baba Rahman to break into the Blues side. The Chelsea loanee just had an excellent recovery season with Ligue 1 side, Reims.