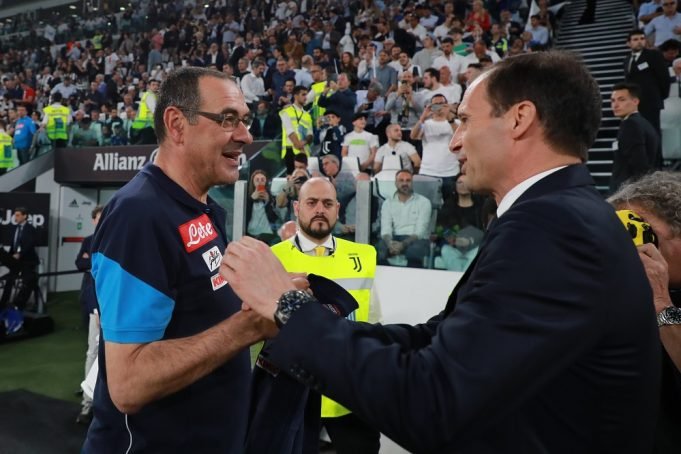 Sarri has been heavily linked to replace Antonio Conte

Antonio Conte has been heavily linked with a summer exit after disappointing defend to the Premier League title this year. Chelsea are currently at 5th position and fighting to finish in the top 4 in order to qualify for the Champions League next season.

Napoli manager Maurizio Sarri has been linked to replace the Italian next season. He has done a great job with the Serie A giants this season, who are currently at 2nd position and still mathematically possible for them to win the Serie A title.

There were even reports that both the managers could their clubs in the summer. Even Napoli President Aurelio De Laurentiis concedes that Sarri could leave at the end of the season and believes Conte would be the perfect replacement:

“Antonio Conte would be a perfect colonel to ensure the rules are respected. He is a friend and lets nobody take a breather. We are not afraid of going forward, with or without Sarri”.

According to CalcioMercato, if Sarri moves to England then then Chelsea could look to sign three Napoli Players. Those candidates are Jose Callejón, Kalidou Koulibaly and Elseid Hysaj.

Since joining the Italian giants, Callejón has continuously been a vital component of the team with his link-up play and a solid output of goals and assists each season. The Blues could sign him on a short deal as he is 31 years old.

Koulibaly has improved a lot this season under Sarri and established himself as one of the best defenders in the world. The Premier league are interested in him over the past couple of transfer windows and again could move for him this summer. But without Champions League it will be very difficult to sign the 26 year old.

Hysaj has already earned plenty of attention from top European clubs this season after his outstanding performances in the right back position. Chelsea have already met with the player’s representatives many times. The 24 year old could be a solid replacement for  Davide Zappacosta, who has struggled since his arrival in England.