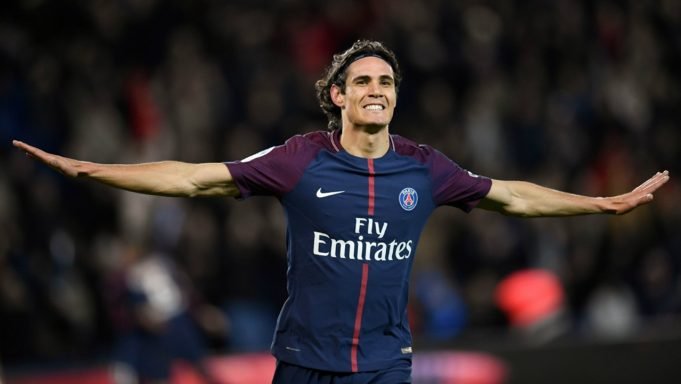 After a quite disappointing season by their standards, Chelsea are looking to reinforce their squad during the summer transfer window, and Antonio Conte seems desperate to bring in a prolific goal scorer, the one that can guarantee at least twenty goals for the next Premier League campaign.

Last summer, the Blues spent around £60 million to secure the services of Alvaro Morata, who has had an average season at Real Madrid, and the tall Spaniard has failed to leave up to expectations, scoring only eleven goals in the Premier League. Therefore, the former Juventus coach wants a proven striker to partner Eden Hazard and Willian in Chelsea’s attacking trident, and the name of Edinson Cavani has emerged over the last couple of weeks as a possible reinforcement.

According to the British press, the dominant Paris Saint-Germain forward is the principal candidate to lead the London team’s attack in the next season. After becoming PSG’s all-time leading goal scorer, succeeding Zlatan Ibrahimovic, the Uruguayan star could be on his way out from Parc des Princes with the Premier League rumored to be one of his potential destinations.

It’s no secret Antonio Conte is a huge fan of the 25-year-old Spaniard, whom he labeled as his primary objective last summer, but if the former Juventus target-man continues to struggle over the summer tour, he would hardly remain a first option for the next season. Chelsea chief of staff can’t afford to rely on an inconsistent striker if looking to bring his side back to the top of European football, which is why Cavani might be a key to his problems. Still, PSG would hardly renounce their jewel, and it will be interesting to see whether Conte would be able to persuade the former Napoli hotshot to leave the Ligue 1.

However, the renowned UK outlet, Metro, broadcasted Cavani’s words regarding his future after the Parisians defeated Les Herbiers only to wrap up their fourth consecutive Coupe de France.

“My future is here, of course,” said the 31-year-old. “I think that it has been a good season and intense.

“We must enjoy moments like these. I am pleased for the supporters and to be here.”

So if it’s up to Cavani, it seems he is eager to remain in the French capital, which is why the Blues have to look for other options.

Chelsea’s goalscoring record in this Premier League campaign has been quite modest, considering they’ve scored the least goals of the first six teams in the league, with an average of 1.67 goals per a game, which is considerably low for a club of such reputation. For instance, in the last five games at Stamford Bridge, last year’s Premier League champions have scored only six goals, a bit worrying, considering they’ve faced off Crystal Palace, Burnley, and Huddersfield among others. A 1-1 draw with the Terriers at home has cost Chelsea the Champions League promotion although the bookies expected the hosts would achieve a routine victory, especially after Conte’s side defeated Liverpool last weekend. With a new season on the horizon, www.thebookiesoffers.co.uk offer great odds and the best service to all soccer fans, who fancy trying out their luck. Punters can find best betting offers here from different online bookies like bet £10 get £30 by Betfair or £50 free bet by Ladbrokes. The Premier League will undoubtedly provide big drama and some unexpected plots, with Chelsea, Arsenal, Liverpool, and Manchester United all ready to challenge Manchester City for the league title.

However, looking at the fact, the Citizens have bagged more than 100 goals this year; it appears the Blues have to solve their issues in the final third if aiming to overthrow Guardiola’s unstoppable wizards. With that in mind, Conte has to act swiftly because Olivier Giroud failed to produce desirable results after arriving at Stamford Bridge last January. The big Frenchman was brought to replace at the time injured Morata but has only managed to net three times since leaving the Emirates Stadium often coming off the bench. It’s enough to say that Eden Hazard had a better goalscoring record than both centre-forwards combined.

The Italian expert has backed his pupil, trying to encourage him ahead of the last two seasons’ matches against Newcastle and Manchester United. Talking about Morata’s future, Conte said:

“It is not right, and we have to focus on the present and finish the season in the best way.

“He is Chelsea’s player and must be ready to play tomorrow and next season. The situation is very clear.”

“I think in this season it was difficult, not only for him.

“I like the focus to be on the whole team, not only the one player.”

Morata has explained his current situation in the club, acknowledging he has gone through a rough period especially during the second half of the season.

“It has been a complicated year for me, and I don’t think it’s been the best year for the team either.

“I’ve gone through a tough year. It all started so well. Everybody loved me and I was scoring goals, but it’s different now.

There’s no doubt that the potential signing of a player of Cavani’s caliber would be a precious addition to Chelsea squad, but it’s yet to be seen how things will develop in the summer.