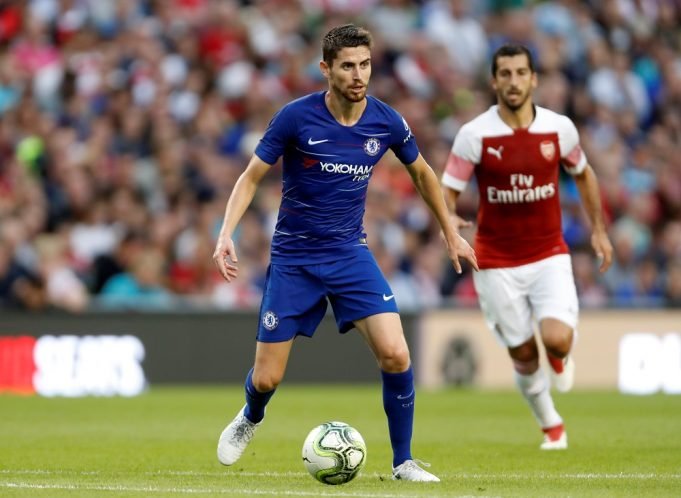 The midfielder became the club’s first signing this summer

Chelsea confirmed Maurizio Sarri as their new head coach last month. He signed a three-year deal with the Stamford Bridge side and has replaced replace Antonio Conte, who was sacked despite his contract expiring next summer.

The Blues also signed midfielder Jorginho from Napoli, signing a five-year deal with the club for a fee around £57 million. He became the club’s first signing this summer, following his former manager to England.

Manchester City were also interested in signing the Italy International before the World Cup but they were not ready to pay the Italian side’s asking price. The player eventually snubbed the chance of joining the Premier League champions.

The 26 year old joined the Serie A giants from Hellas Verona in 2013 and has been a mainstay in the midfield since then. He has constantly performed at the highest level and developed himself as one of the best midfielders in the league.

The Italian was pivotal for the club last term, linking the play between defense and attack. He scored 2 goals and assisted 4 in all the competitions.

The Player has extensively featured in the club’s pre-season and has been very impressive. He is expected to start against Manchester City in the Community Shield on Sunday.

Alvaro Morata has hailed Chelsea’s acquisition of Jorginho and believes he will be prove to be a key signing for the club this season.

“We are lucky,” he told the Mirror as quoted by Goal.

“We’ve made a very good signing, because he’s a fantastic player, a fantastic guy and because Manchester City wanted him! It would have been very bad for us if City has taken him.

“He was one of the best signings of the last year for Chelsea because now, when we have the ball, he is the key.

“Jorginho and Cesc Fabregas with the ball are two of the best midfielders around.

“There are not too many midfields with this level with the ball – for the strikers it is fantastic.