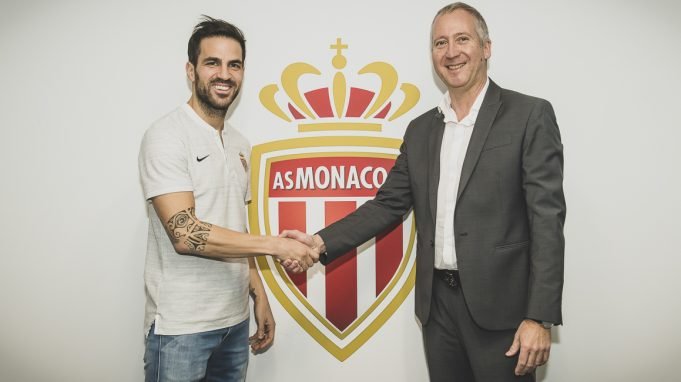 Chelsea have confirmed the transfer of Cesc Fabregas to AS Monaco. The 31-year old signed a three and a half year deal with Monaco which will keep him at the club till 2022.

Fabregas joined Chelsea from Barcelona in 2014 and has since made 198 appearances for the club across all competitions, scoring 22 goals and providing 57 assists.

Fabregas helped Chelsea win the Premier League twice, an FA Cup title and the League Cup. The Spaniard was a regular for Chelsea until the end of last season. This season, he struggled for playing time under Maurizio Sarri and made only 16 appearances, scoring a goal and providing two assists.

Fabregas previously hinted about his move to Monaco by bidding a tearful farewell to Chelsea fans following their FA Cup win over Nottingham Forest.

A statement from Chelsea read, “We thank Cesc for his wonderful service and wish him the very best of luck for the next chapter in what has been a fantastic career.

There is no doubt Fabregas’s place in the Chelsea history books is assured given his achievements over the past four-and-a-half seasons.

Big goals and outstanding moments of quality, all backed up by the ultimate aim, which is to be part of a successful, trophy-winning team.

Fabregas, who scored 22 goals for the club in total, departs having helped the club achieve great success, as well as providing our supporters with some wonderful memories. He leaves with the very best wishes of everybody at Chelsea Football Club.

On joining Monaco, Fabregas said, “It is a great pleasure to join AS Monaco, a new project for me. The group is of quality with young players and a young coach. I’m here to help the team, I cannot wait to start, we have a great match to play on Marseille on Sunday. I am very excited.”

Monaco’s Vice-President Vadim Vasilyev said, “We are very pleased to welcome to AS Monaco, Cesc Fabregas, a world-class player and a great professional, whose arrivaal demonstrates the ambitions of the club. This is obviously a very good technical reinforcement for the team but we are convinced that his experience of the highest level will bring a lot to our players on and off the field.”

Fabregas will be reunited with his former Arsenal teammate Thierry Henry at Monaco. Monaco are currently in a very difficult situation as they are 19th in the Ligue 1 table.

Thierry Henry’s side reached the semi-finals of the Coupe de la Ligue by beating Rennes in the quarter-finals on penalties. They take on Guingamp in the semi-finals later this month.

Fabregas will most likely make his debut for Monaco tomorrow against Marseille.